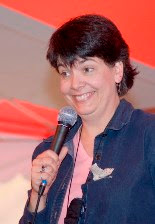 Stephanie Holman came upon this two line telegraph while reading through the archives at the Indiana Historical Society. This wireless “Radiogram” sent home after the attack on Pearl Harbor still speaks to us as do all the letters sent home to Indiana. This storytelling performance presents a fascinating mix of humor and fear revealed in those writings. The letters from soldiers and their families describe both the realities of war on the battle front and the effects of war on home towns. Stories of military life dominate the narrative, from trials in training to close calls in battle, but they also show the soldiers yearning to stay in touch with home by their questions about crops and classmates and a sister’s promising romance.
Posted by Bloomington Storytellers Guild at 10:51 AM