It's a Blue Ribbon --and that's the truth! 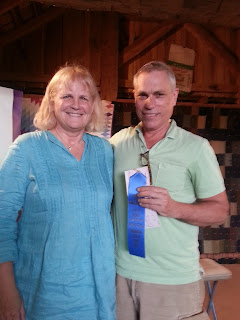 Part of me is morally opposed to storytelling contests. Contests determine winners and losers, and I believe that when a good story is well-told, there are no losers, only winners. But I understand the appeal of liar’s contests, and they are a great way to introduce audiences to storytelling and that great American art form, the tall tale.

So putting my ambivalence aside, I pulled out my best tall tale and headed up to the Liar’s Contest at the Indiana State Fair. August 7th was opening night of the fair, and the state fairgrounds were packed. A steady crowd was filling the seats at the Pioneer Village stage as I nervously signed up. It was good to see familiar faces. Ellen Munds, director of Storytelling Arts of Indiana, was ensuring a smooth event; and Celestine Bloomfield, retired school librarian and storyteller extraordinaire would be the emcee.

The contest was divided in to a youth division and an adult division, and Celestine alternated between the youth and us four adults taking turns on the stage. All of the children wrote their own stories, and while some did not quite grasp the finer elements of a tall tale, they all did an admirable job. Some were downright delightful. Among the adult stories, there were two fish tales. One was particularly well-crafted and well-told, but he evidently far exceeded the time limit and was severely penalized by the judges.

I am no stranger to state fair competition…as four time Wayne County 4-H horse and pony showmanship and equitation champion, the state fair was an annual August ritual. But I was always out-horsed and out-classed and I could do no better than third. This year, when the winner of the Liar’s Contest was announced, a blue ribbon at the Indiana State Fair was finally mine. But as I said above, there are no losers with good storytelling – everyone in attendance, whether in the audience or on the stage, was a winner that night.
Posted by Bloomington Storytellers Guild at 10:22 AM