Saturday was the annual Eerie Tales event at the Knox County Library in Vincennes. (Patty was there for the first one, 14 years ago.) 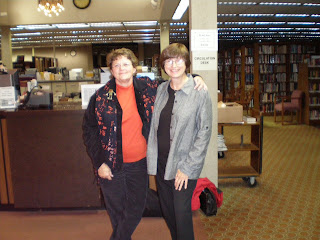 We were the "Professional raconteurs from the Bloomington Storytellers’ Guild" in their publicity. The crowd of 65-70 people gathered on tarps laid over the cold wet lawn in the library courtyard. A giant century-old Tulip Poplar towered over them. A swelling half moon slowly rose in the sky beyond the brick wall enclosing the courtyard. Both Ginny and Patty tried out some new stories as well as telling some old favorites. The audience listened closely, ignoring the trucks revving their engines at the corner and the train whistles that went on and on and on until Patty put them in her story.
Posted by Bloomington Storytellers Guild at 4:31 PM

Sounds wonderful! I wish I could have been there.