Getting ready for our meeting

Since we will be discussing folktales at our meeting on Friday, April 19, here is a classic collection: 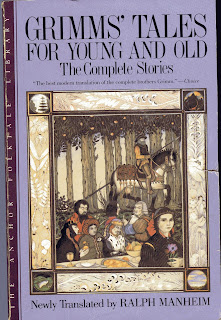 And a comment from the translator:
"Why, in English, were they called fairy tales in the first place?  For, despite a considerable population of devils, witches, goblins, and elves, there are, strictly speaking, no fairies in these stories.....
The reason is that when the tales first arrived in England, such "absurdities" were thought to be fit only for children, who were distinctly second-class citizens at the time. ... And since the tales were addressed to children, they were termed fairy tales and , by and large, gift-wrapped in a fairy-tale style that was supposed to appeal to children.
In the present century, however, and especially in the last few decades, the Tales for Young and Old....have, with no change on their part, become more and more modern..."

Do you think folktales still speak to adults?
Posted by Bloomington Storytellers Guild at 6:04 AM