Reflections on the Festival of Ghost Stories

As daylight faded,  the audience began to gather on the hillside and Keith sent the first notes of "Black and Gold" out into the twilight. 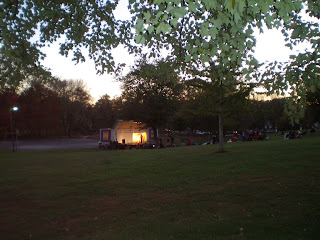 Our co-sponsor, Bloomington Parks and Recreation, provided a wonderful well-lit stage, a super sound system, and hot cider for a chilly night. 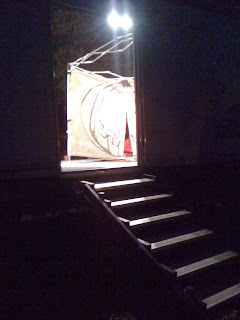 Waiting backstage we could hear the muffled sounds of appreciative but well mittened applause.  It did get downright cold before the evening was over. 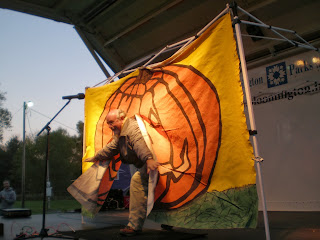 We did not actually burst out of the jack-o-lantern as we came on stage...but Ken is having fun during the sound check. 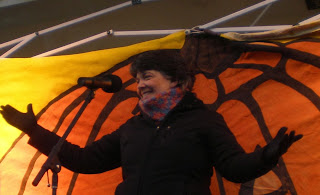 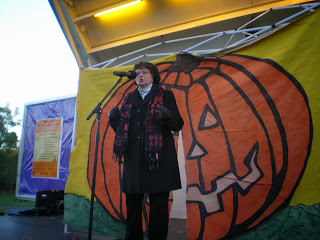 Stephanie started us out with a gruesome urban legend "The Slasher" (and made us wonder -- do you remember when no one had cell phones and there were actually phone booths at every little store or gas station????)

Patty got the audience warmed up with "Barney McCabe" as we all tried our best to get those dogs there in time to save the kids from the awful witch. 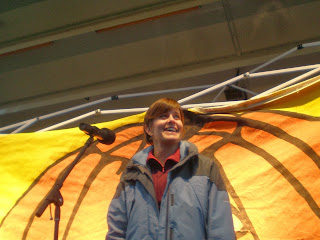 Here's Lisa before her story - no smiling during the tale of poor "Pretty Maid Alana". 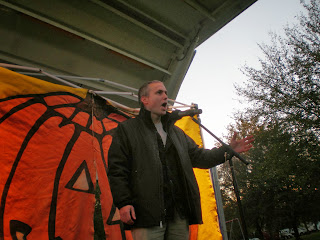 And Josh sent everyone home laughing -- and at the same time resolving never to leave a baby alone outside.

Thanks to all who told, and to the Monroe County Public Library and Bloomington Parks and Recreation Department for cosponsoring the event.  It was taped by CATS and so if you missed the performance you may yet see it on cable TV.
Posted by Bloomington Storytellers Guild at 7:28 AM